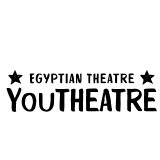 Live theatrical performances have long been a centerpiece of Park City's culture, even in the rough and tumble days of active mining. In the late 1880's, the impressive sum of $30,000 was raised by subscription to build the ornate Opera House that hosted touring companies. On a warm June night in 1898, fire roared downhill from the American Hotel and quickly threatened to consume the town. Despite the assistance of fire companies from as far away as Ogden, most of the town was demolished, including the Opera House, which was gutted.

In a Determined effort to restore live theatre to the town, the Dewey Theatre soon opened its doors on the site of what is now the Egyptian Theatre. In addition to live theatre, the Dewey was known to host grand ballroom dances, prize fighting, and even boasted a bowling alley in the basement. The Dewey remained a popular cultural center until its roof collapsed under a record-breaking snowload.

In 1922 new construction began on the site of the old Dewey Theatre. Influenced by the recent discovery of King Tut's tomb, John Rugar opened The Egyptian Theatre on Christmas Eve, 1926. Supervised by an Egyptologist from Seattle, The Egyptian Theatre was adorned with lotus leaf motifs, scarabs, hieroglyphics and symbols of life and happiness. Park City was once again flush with a first class showplace, this time for films and live performances.

With the rebirth of Park City as a ski and resort town in the 60's, an increasing population of locals and tourists came to town. The Egyptian Theatre continued to present live theatre, 'though old fashioned "meller dramas" were the most consistent fare.

By 1978 the building's architectural integrity was again threatened. Preservation of its distinctive Egyptian features was necessary. Through much local effort and fundraising, the building was refurbished and became home to Park City Performances in 1981. Live theatre of all genres was again presented on the boards of the theatre.

However, by the mid 90's, the building was in need of major repair and renovation. Save Our Stage was formed by a few community-minded individuals who raised funds for a major facelift to restore the building to its former glory.

Today, the Mary G. Steiner Egyptian Theatre hosts a variety of musical acts, special events, community fundraisers and more. While money is always tight at the theatre and donations are always appreciated, the Egyptian Theatre is able to function as a landmark venue on Park City's Main Street while retaining the distinctive flavor of years gone by, much like Park City itself.

You have no education resources added; you can add one here.