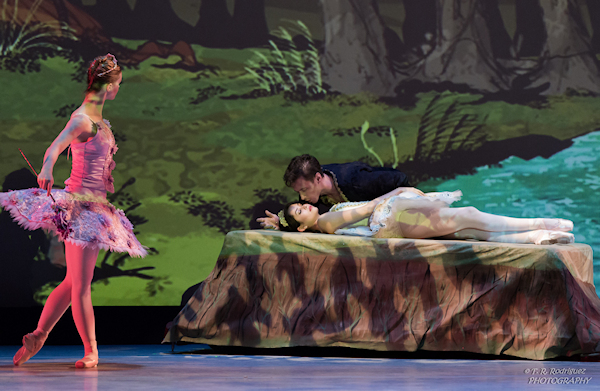 The 13th Century tale of Sleeping Beauty and many favorite fairy tale characters -- plus some you may not  have heard of before -- come to life in Rochester City Ballet's Sleeping Beauty. But make no mistake,  while children will love this production, so will adults!  Tchaikovsky's epic ballet normally runs for three acts and more than three hours, but RCB's adaptation is designed to run under two, so all can enjoy it. The production begins when the Prince meets the Lilac Fairy in the forest, and the ballet takes us through the classic scene of Princess Aurora’s and Prince Désiré's Wedding, as the Second Act.

It is important to note that members of the company switch off dancing the many exciting, challenging roles during the four performances. While I saw Sleeping Beauty on Saturday night, I assure you that this company is so accomplished, you will be enraptured by any of the performances. 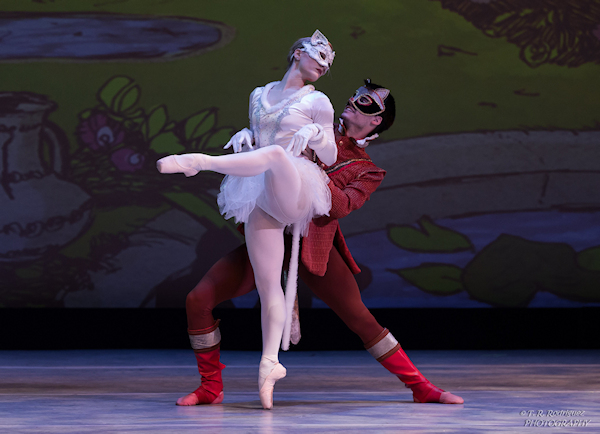 On Saturday, Katherine Duffy danced the role of the Lilac Fairy, who is the protagonist of Sleeping Beauty, and who manages to change the outcome of the evil fairy Carabosse's curse from certain death to merely sleep. As the lovely Lilac Fairy, Duffy sparkles in demeanor and dance. She is surrounded in the first act by a bevy of nymphs, and in the second by her attendants, whose lines, symmetry, and precision are beautiful and absolute. Throughout the entire performance, it is remarkable how precisely each and every character's movements aligns with the music, exactly matching beats, replicating swells, and interpreting the music with visceral emotion.

Princess Aurora (Taylor Bibee) and Prince Désiré (John Deming) are enchanting. Their solo work is stunning, as are their pas de deaux. During the second act, especially, when they go from intricate dance sequence to Aurora's death-defying dives, it is clear how well they work together. The scene in which Prince Désiré encounters Carabosse (Francesca Genovese) and her Ravens (Michael Jurica, Wyatt Pendleton) is thrilling! Carabosse weaves a spell over the Prince, to which he begins to succumb, and only manages to break free with the assistance of the Lilac Fairy. In their movements, Carabosse and her Ravens embody evil. 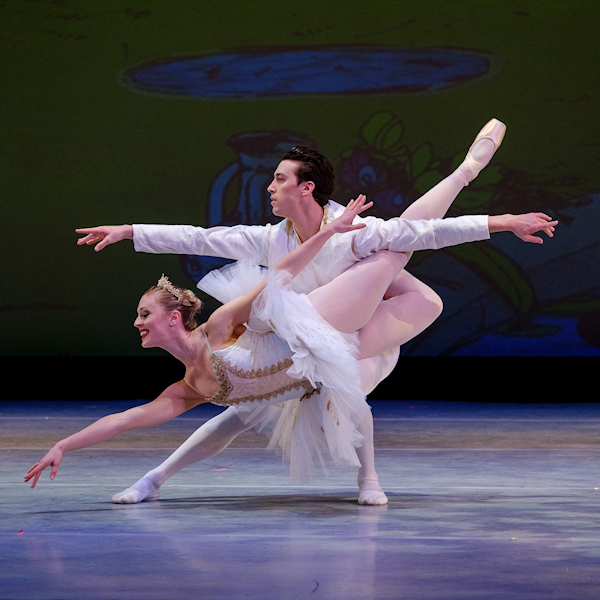 In the Second Act, not only do we see some exquisite dancing from the principles, but the other fairy tale characters imbue their roles with personality and, especially in the case of the trees, humor, adding very memorable sequences to Sleeping Beauty. Caitlin Schwartz captivates as Red Riding Hood trying to elude Wyatt Pendleton as The Wolf, whose leaps and stealthy moves leave no doubt as to his devious character. Lydia Marbach as The White Cat and Ryan Corbett as Puss in Boots are the cats' meow, alternating between playful cuddles and cat fights. Kelly Moeller as Gold Jewel and Erica Raver and Shannon Rodriquez as Silver Jewels shine. And in the touching roles of Princess Florine and Bluebird, Jessica Tretter and Christopher Collins are magnificent.

Cudos on the costume designs for this show, as well as to digital set designers Cordell Cordaro and Marco Fesyuk.

While Rochester City Ballet performs and excels at contemporary ballet as often as traditional, this performance leaves no doubt that RCB is equally adept at the classics. I loved this performance, and I don't think a smile left my lips during its entirety. The audience clearly felt the same way. This is a shimmering jewel in RCB's repertoire.

There are two more opportunities to see Sleeping Beauty at Nazareth College Arts Center.  The sensory-friendly show  is at 12 noon on May 19 and is free for families with special needs children, being generously underwritten by RCB donors. To register for the sensory-friendly show, click here.  The final performance can be seen at at the Arts Center at 4 pm on Sunday, May 19. If you love dance, don't miss Sleeping Beauty!

Carol White Llewellyn is Editor of BeyondTheNest.com and the host and producer of Conversations with Creatives, a cable and online TV program that explores the arts and celebrates artists and their work.